By Gavin Mendel-Gleason April 28, 2017
I was ironing my shirt today, which I almost never do. Because of this I don't have an ironing board so I tried to make a make-shift ironing board on my floor using a towel and some books. I grabbed the heaviest books on the nearest shelf, which happened to be Organic Chemistry, Stalingrad and an annotated study bible containing the old and new testament.

As I pulled out the bible, a flower fell out which had been there for over 17 years now. I know that because it was put there by my first wife, Daniel, who killed herself in April about 17 years ago.

It fell from Thessalonians to which it had been opened partially. Highlighted was the passage: "Ye are all sons of the light and sons of the day."

I guess the passage gave her solace. Daniel was a complicated woman. She had serious mental health issues which plagued her for her entire life. None of them were her fault. She was dealt an absolutely awful hand in life, some truly nasty cards.

She had some considerable cards to play despite this. She was fierce intelligent and stunningly beautiful. She didn't always play her cards well though, and I think it is because she didn't want to as she felt like she should be made to suffer.

I loved her tremendously even if she was hard to love. She didn't love herself and didn't take very kindly to others doing it. If she thought you might love her she'd test you, and the tests could be pretty awful.

Despite this, she loved others as intensely as she tested them, and sometimes she could be the a truly beautiful and generous person. She was a bundle of contradictions.

She was incredibly intense. She was hot as hell fire, a searing intelligence and a fierce biting anger.

I remember vividly the day she died. She was working as tech support in a university computer lab. That day she had brought a liter of Vodka in to work in a plastic water bottle and I guess had nearly passed out from drinking. They checked the bottle and found it full of alcohol. They promptly fired her on the spot.

I came home from my after-school job to find my friend there, and her in a serious state of what seemed to be drunkenness, anger and irritation. She told me she was fired and was screaming at me, I think, that I should send my friend home. I ignored her.

It was a terribly hot day in Albuquerque, the kind where the sun just will not leave you be, and leaving did not appeal. I was huddled in my living room on the shabby couch playing guitar while my friend used my computer, both of us trying to avoid the sunlight and pretending not to hear Daniel's protestations.

She said, "Fuck it! I'll just kill myself!" I looked up and shouted, "Do it then and stop screaming at me!". She went directly into the next room and shot herself in the head.

The shot fired and I shot up off the couch, threw the guitar and screamed at the top of my lungs a scream of terror. I ran into the bathroom, and then into the bedroom where she was and saw her with half her head missing. I screamed again several times and then began running around the house turning over tables and trying to turn a bookshelf over on myself with my friend trying to restrain me. He eventually dragged me physically from the house, slapping me repeatedly saying that I couldn't destroy the house or I'd be likely to be charged with murder. The whole thing made no sense.

I spent the next day in a stupor. I think I wasn't even drinking, I was just in shock. I couldn't stay in the home she had been shot, so I went to my fathers. I remember doing group theory homework. My dad kept asking me if she was involved with drugs which I just ignored. I could hear my dad and her father trying to make sense of it by recourse to the causes: the wrong friends or drugs or drug dealing or alcoholism or something.

I couldn't stand their talk. Alcohol was involved. Maybe drugs were. Those were just symptoms anyhow, not causes. I left for a friends house, where I stayed playing video games and drinking for days until my mother came to collect me and we flew home to Alaska for the funeral.

The funeral was a disaster. Her mother turned it into the most absurd evangelical Baptist affair imaginable with the most reactionary pastor in Anchorage. People asked me if I wanted to push for something different. I just ignored it. Her mother could have what she wanted. And her father, an atheist, I had no idea what to do for him given that he'd lost his only child.

Daniel sometimes believed in god and when she did she hated him for what he allowed happen in the world. And I really mean hate with a visceral screaming bitter hatred, and by the look of it, it was more extreme than anything I've ever felt. Sometimes she didn't believe in anything, and I think this made her feel better. And sometimes she believed that there must be some kind of way out, a loophole, and maybe she could find it in the bible.

People would say things to me. Things that I guess were meant to help, but one thing I heard a number of times really stuck with me. "That was a really terrible thing she did to you Gavin" and "That was so selfish". It was a surprisingly common condolence.

I'll be honest, it made me want to beat the shit out of them. How the fuck was anyone to say something like that. Nobody knows what she was going through. It was worse than I can imagine. I've felt like offing myself before, but I know I've never had the protracted intense debilitating pain that she experienced.

It took me years to talk about it. I spent years being really reckless and drinking far too much. The first few years were filled with me starting unprovoked fights in bars or places I can't even remember I was so drunk. And I only talked about it while drunk. Over the last 10 years or so I've been able to say things about it to people sober. First occasionally, then a bit more casually.

This is the first time I've written down the experience. I'm glad she put that flower there. 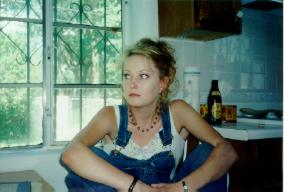 Popular posts from this blog

By Rubrication February 03, 2007
I just got "ML for the working programmer" in the mail a few days ago,
and worked through it at a breakneck pace since receiving it. It
turns out that a lot of the stuff from the "Total Functional
Programming" book is also in this one. Paulson goes through the use
of structural recursion and extends the results by showing techniques
for proving a large class of programs to be terminating. Work with
co-algebras and bi-simulation didn't quite make it in, except for a
brief mention about co-variant types leading to the possibility of a
type: D := D → D which is the type of programs in the untyped lambda
calculus, and hence liable to lead one into trouble.

I have to say that having finished the book, this is the single most
interesting programming book that I've read since "Paradigms of
Artificial Intelligence Programming" and "Structure and Interpretation
of Computer Programs". In fact, I would rate this one above the other
two, though …
Post a Comment
Read more

By Gavin Mendel-Gleason February 14, 2019
Prolog is a beautiful language which makes a lot of irritating rudimentary rule application and search easy. I have found it is particularly nice when trying to deal with compilers which involve rule based transformation from a source language L to a target language L'.

However, the management of these rules generally requires keeping track of a context, and this context has to be explicitly threaded through the entire application, which involves a lot of irritating and error prone sequence variables. This often leads to your code looking something a bit like this:

compile(seq(a,b),(ResultA,ResultB),S0,S2) :- compile(a,ResultA,S0,S1), compile(b,ResultB,S1,S2).
While not the worst thing, I've found it irritating and ugly, and I've made a lot of mistakes with incorrectly sequenced variables. It's much easier to see sequence made explicitly textually in the code.

While they were not designed for this task, but rather for parsing, DCGs turn out to be a convenient …
Post a Comment
Read more

By Rubrication March 02, 2012
So I've been playing with typing various things in System-F which previously I had left with auxiliary well-formedness conditions. This includes substitutions and contexts, both of which are interesting to have well typed versions of. Since I've been learning Agda, it seemed sensible to carry out this work in that language, as there is nothing like a problem to help you learn a language.

In the course of proving properties, I ran into the age old problem of showing that equivalence is decidable between two objects. In this particular case, I need to be able to show the decidability of equality over types in System F in order to have formation rules for variable contexts. We'd like a context Γ to have (x:A) only if (x:B) does not occur in Γ when (A ≠ B). For us to have statements about whether two types are equal or not, we're going to need to be able to decide if that's true using a terminating procedure.

And so we arrive at our story. In Coq, equality is som…
2 comments
Read more